In the Dust Bowl (the setting for A Cup of Dust, releasing this October), folks had very few options for groceries. They often got food from the “Relief Truck”, but didn’t always get fresh items (like dairy items or meat). They had to make due with what they had. That’s what today’s recipe is all about. Making due.

I’ve been so excited to try this recipe. A cake with no eggs, no butter, no milk. How is that even possible? Well, it’s possible because, in desperate times people find solutions. Especially when they’ve got a hankering for a little cake.

Crazy Whacky Cake was a popular recipe during World War I (or, as Depression Era folks called it, The Great War…because…well, they didn’t know about World War II yet…it was still a decade away). WWI housewives sent all the provisions they could to the boys fighting the war, leaving them without many of their staples (or with a minimal supply). These housewives became Depression Era housewives, carrying over their resourceful ways from before.

The ingredients for this recipe are simple.

1 1/2 cup flour (I used Live Gfree flour from Aldi)
3 Tbsp unsweetened cocoa powder (if you don’t like chocolate…what’s wrong with you? But you could omit this)
1 cup sugar
1 tsp baking soda
1/2 tsp salt
1 tsp white vinegar (VINEGAR??? In CAKE??? Yup.)
1 tsp vanilla
5 Tbsp Veggie oil (or LARD if you’ve got it sitting around)
1 cup water

Dump your dry ingredients into the pan. Mix until combined. It might seem like everything will overflow. Don’t worry. It’ll fit just fine. Then, make three divots in your dry mix. One large, two smaller.

Measure your vanilla into one of the smaller divots, oil into the larger, and vinegar into the other small one. Why the vinegar last? Because it makes a cool chemical reaction (spoiler: it helps the cake rise) and kids love to watch that for a few minutes. 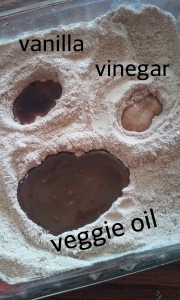 Then take your cup of water and flood the whole thing!

Stir until it’s all mixed together. Be careful that all the dry mixture is unstuck from the sides of the pan. This takes a few minutes longer than you think. Also, there’s a splatter hazard. Mix carefully, my friends.

Carefully…OH so carefully…carry that pan over to the oven and slip it in. Bake it for 35ish minutes or until it passes The Toothpick Test (you know, stick the toothpick in and it comes out clean…which always mars the beautiful cake, right? I guess that’s why we have frosting).

Let it cool! DO NOT EAT IT YET! Be patient, will ya?

And, no, blowing on it won’t speed up the cooling process. Believe me, I tried.

While you’re waiting you could mix up a batch of frosting (powdered sugar, milk, butter) or you could do some laundry or paint your nails. But keep your hands off that cake!

When the time comes, cut that cake up. Now, I didn’t put frosting on. I was trying to be authentic and stick to the no butter, no milk, no eggs thing. I just sprinkled a little powdered sugar on top.

Oh! And, small pieces. This cake is RICH! Mercy.

If you’ve got some vanilla ice cream, that would be yummy on top.

My kids gave this cake 6 out of 6 thumbs up. My husband, though, said it was good (he was being nice) but a little dry. To be fair, it might have been the gluten free flour.

However, we found that a good solution was to pour a little milk over the cake, crumble it up, and have a thick pudding. Weird, but yummy.

So, I dare you to try this! You can cut the cocoa powder and add other flavors if you’d like. It’s a fun cake to make with kids. Happy baking!

Hey! Join the fun. If you make any of the recipes I’ve included here on the blog, I’d love for you to take a selfie with your food and send it to me. Goofy? Totally. But so very fun.

← The Grateful Girl and Veteran
Thoughts on Maggie Bright, The Shrew, and Prayer. →