Posted on September 28, 2015 by Susie Finkbeiner

A few years ago I went to an antique store with my mom. She likes to look through the beautiful dishes and wall hangings and such. I find the nooks where the boxes of old family pictures are.

There’s something sad about sorting through these boxes. All of these beautiful photos, forgotten and sold for a few quarters. I end up adopting some of the pictures.

“What do you use these for?” one of the sellers asked one time.

I found this picture while researching for A Cup of Dust. Holding it, I knew right away.

This was Mary Spence. Pearl’s mama.

As I read story after story of first hand accounts of The Dust Bowl, I learned about some of the incredible women who kept the homes running and the kids fed and the house from drowning in dust.

These women were courageous. But they were also compassionate, knowing that they had a responsibility to those who had things harder than them.

I remember a story of a woman who always kept butter sandwiches made up for when hobos came around looking for “make-work” to earn food or money. She never turned away a man who was willing to do a few chores. 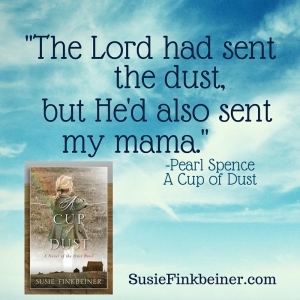 A son told of how his mother battled against the dust to keep her garden as long as she could. It was a losing fight, still she didn’t back down.

So many stories…I wish I could share them all with you. That’s one of the reasons I’m so excited about this novel releasing.

As I wrote Mary Spence into the story, I wanted her to be all of those things I’d read about in the women I’d come to so greatly admire. And I wanted her to represent those women who didn’t break under the pressure. They didn’t break, but they still bent a bit. Who wouldn’t have? But the bending didn’t snap them, instead, it was what built more strength in them.

When I look into the eyes of the woman in the picture I found at the antique store, that’s what I see. Grace and determination and fierce love.