When Someone You Love Dies – A Tribute to a Friend

Posted on November 10, 2014 by Susie Finkbeiner 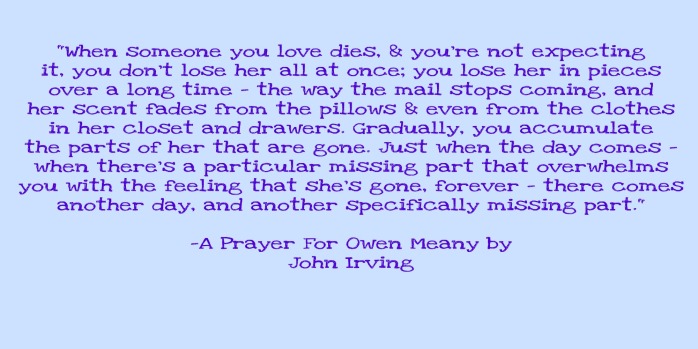 The first time I met Kathy, she was wearing feathers in her hair. She had bright green eyeshadow darkening her lids all the way up to her brows. She was going to a concert for some late 80’s hair band and she could hardly sit still for the excitement. She left the creative writing class I was teaching early to catch the bus. She promised she’d get her homework done by the next time I came.

Another time I saw her, she had bandages wrapped around both wrists. Her hair had been dyed several different colors, but hadn’t been washed in too long. She wore her pajamas. Several layers of them, in fact. She was on so many anti-psychotics she couldn’t hardly talk. She fell asleep easily.

Yet another time, Kathy spoke of a strange, celestial battle over her soul. Myth-like creatures struggled against one another to win her loyalty. Those beings were upset because I was visiting. Kathy asked me to leave, genuinely afraid for my safety.

Then, the next time I saw her, she was smiling, dressed in a colorful and peppy outfit. She was singing and giving hugs and talking about how good life was.

Kathy’s 45 years were full of the ups and downs of profound mental illness. Trying to battle it herself, she struggled with drug abuse and all the darkness that surrounds that lifestyle. Over and over and over, she got clean and tried to stay that way. But the call of addiction is strong and she fell to it several times.

Kathy was a mother and a friend and a daughter. She was generous. She was loving, even when the hallucinations clouded her senses. K was trying. She really was. She was trying to live well.

She died Thursday after almost a week on life-support.

I can’t find an obituary for her. On the funeral home website, there are no details about a service. Just an online guestbook with one entry.

I think that makes me saddest of all.

So here is my tribute to her.

I miss her. And I know that I will miss her over and over. That, in my memory, I’ll keep a snapshot her smile and voice and the struggles she braved to fight. I’ll remember the way she hugged for (maybe) a little too long. How, when given a gift, she was go on and on with her thanks. How she’s write stories with creativity that blew my socks off. How we’d written a poem together and she’d cheered, making me read it no less than 10 times (it was really a great poem because of her words, I didn’t mind reading it). I’ll remember the time she was in charge of making a turkey for our Thanksgiving party. She made it 4 days early because she was afraid it wouldn’t be done on time.

Kathy had a hard life. But she filled this world with plenty of wide smiles and beautiful laughs.

The world is a little bit quieter without her in it.