I love coffee. You all know that, I’m sure. And I really like it with flavored creamers. I know. I know. They’re full of chemicals and fat and sugar.

Still, I really enjoy them.

The other day, my hubby went to the store for a few things. Toilet paper, cheese, and coffee creamer.

Now, my hubby picked up a few of the Girl Scout Cookie flavored creamers. The Thin Mints (oh, if heaven was on earth…it would taste like Thin Mints) and Caramel and Coconut (which we called Samoas when I was a kid, right?).

The Thin Mint creamer didn’t last all that long. It. Was. Fabulous. 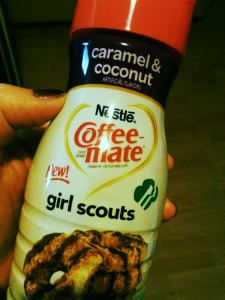 The Caramel and Coconut? Blech. I declared it not fit for consumption after the first sip.

“Why not?” he asked, looking devastatingly handsome.

“Um, Sooze, you aren’t the only one who drinks creamer.”

At first, I contemplated questioning his sanity and sense of taste. Surely his tastebuds were damaged by all the Spaghetteos and hotdogs.

Then, I remembered something I heard Agent Ann say*.

See, I might think that creamer is the nastiest thing in all the world. Someone else might believe it is delicious. Same with liver pate or sea food. We like different flavors. And that’s okay.

It’s even okay if you like something I don’t.

You know, it’s the same for music, art, film, and literature.

Wouldn’t it be something if, instead of saying that a book was “meh” or “bad”, we said, “It’s not my flavor”. Or, “My tastes are for something a little faster paced”. Instead of trashing another’s work with a “blech”, we admitted that it might be better suited for a different reader/viewer/listener?

So often, I read reviews (mostly on Amazon or Goodreads) that include negative things about a book. It was too slow moving, too fast. The characters weren’t likable or were melodramatic. And on and on. The reviewer gives a low star rating and declares the book “not all that good”.

Many times, the same book has 5 stars from other readers and really positive comments**. The reviewer truly connected with the book and enjoyed it. They emote about the book.

So. Who is right?

I don’t think there is a right or wrong here.

It is a matter of taste.

I’ve heard from both reviewers things like, “Did we read the same book?”

But you are different people.

What moves me isn’t going to move my best friend. What I think has merit, another person will think is worthless.

My flavor isn’t your flavor.

You know, it’s okay. In fact, it’s great. The world is full of different flavors, genres, writing styles, types of movie and music and art. If we all enjoyed the exact same thing, the world would be boring and the realm of art narrow.

So, I say, Three Cheers for different flavors! Huzzah to different tastes!

Just, let’s be kind and polite and remember that our differences are good.

*My agent’s name is Ann Byle. Here at my house, we call her Agent Ann. Sometimes I sing, “Secret Agent Ann”.

**Now, I understand that moms and uncles and bffs are going to give overly-glowing reviews. And that some books solicit reviews that are more than generous. I’m referring to honest reviews. Especially those written by folks the writer doesn’t know.

← On Feeling Like You Just Aren’t All That Good.
Write Something →

16 Comments on “Not My Flavor”