Posted on February 20, 2013 by Susie Finkbeiner

Today, it is my honor to welcome Christine Lindsay to the blog. She is a fellow WhiteFire Publishing author. I have been so glad to get to know her. Her newest novel ‘Captured By Moonlight’ just released for digital download. I hope you enjoy my interview with her!

Susie Finkbeiner (SF): Christine, I’m so glad you could share with us today. Now, your novels ‘Shadowed in Silk’ and ‘Captured By Moonlight’ are both set in India. I am curious. What made you choose that setting?

Christine Lindsay (CL): India has fascinated me since I was a kid. A number of my ancestors served in the British Army in Colonial India in the nineteenth century, so I grew up on those stories. Especially interesting, was a great uncle who served in the British Cavalry in the Dragoons. So magnificent in his uniform and on horseback.

And my all-time favorite books were written by the great MM Kaye who wrote epic adventure romances set in the British Raj. If I was ever to write a book, it had to be set in that era, but from a Christian viewpoint.

It was after I had already written Shadowed in Silk, Book 1 of the series Twilight of the British Raj, that I finally got to visit India. I went with a missions group and spent 10 days in the southern province of Tamil Nadu.

So, naturally, when it came time to write Book 2 of the series, Captured by Moonlight, I featured the actual areas I had visited.

I’ve walked the beach my character Laine Harkness walks in the moonlight. I’ve smelled the fragrances of Indian’s tropical flowers. I’ve seen the landscape from the very train lines that my characters travel on.

SF: Interesting. Your answer leads me to wonder about the people you met on your travels. Were any of your characters inspired by those you encountered while in India?

CL: The Indian people I met were so warm and fervent in their faith for Christ, their personalities do color my Indian characters.

But the true-life people who inspired my characters lived and died many years ago. Three of them are actually featured as walk-ons in Captured by Moonlight. They are Pandita Ramabai, a former Hindu widow who became a Christian and created a mission compound that rescued cast-off and abused women and children.

Sundar Singh, a former Sikh, who after he came to faith in Christ, walked all over India sharing the Gospel message.

The third true-life hero is Dr. Ida Scudder, an American medical missionary who built one of the greatest hospitals in all of SE Asia. She started her hospital and college to train Indian women to become doctors.

SF: Any plans to return to India?

CL: If I had the money, I’d be buying my ticket right now.

Seriously, I think I will return. This time to visit the Ramabai Mukti Mission, especially if I can go with my birth-daughter Sarah. Sarah is the child I relinquished to adoption when she was 3 days old, and whom I was reunited with 20 years later. She is a nurse serving with Global Aid Network and the Ramabai Mukti Mission is in her sphere of care.

If you would care to donate to that worthy mission, let them know that Sarah Blaney’s birthmom sent you.

SF: You mentioned that those you met in India were strong in their faith. That leads me to my next question. Could you please discuss the Spiritual themes within ‘Captured By Moonlight’?

CL: The themes of my books are the spiritual lessons that I have learned or am learning. In Captured by Moonlight, it is learning to die to myself, to let my hopes, dreams, and ambitions, die so that Christ may let His plans and life flow through me.

This is shown when Eshana—a Christian who wants to run the medical mission in the footsteps of her mentor. But God allows Eshana to be captured by her uncle, a very traditional Hindu who is angry that she is living as a Christian.

When Eshana’s head is shaved and she is once more dressed in the course white funeral garments of a Hindu widow, and imprisoned, she cannot understand why God would allow such a thing to happen. Why would God keep her from the work she wants so desperately to do for Him?

She eventually learns—like I have learned—that we can trust God’s plans for our life. His plans and timing turn out more magnificent that anything we could ever devise.

SF: Now, the lovely and talented Roseanna White designed your covers. As gorgeous as they are, I think that the story behind your cover models is even more beautiful. Would you care to share a bit of that significance with us?

CL: First of all, the model on the front cover of Shadowed in Silk is my birthdaughter, Sarah, the young nurse who is working with Global Aid Network (above). In many ways, Sarah was the muse to get me started writing in the first place.

At our reunion when she was 20 years old, I became so broken-hearted, reliving the original loss of her as my child. Months later, my husband caught me crying, and placed a brand new journal and pen in my lap, and said, “Here, honey, write it.”

That was the beginning of my writing ministry. 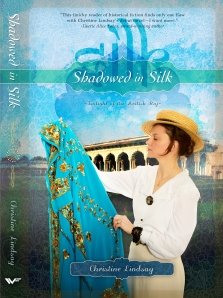 When Shadowed in Silk was about to be released, WhiteFire publishing sent me photos of models for my perusal. Those photos reminded me of Sarah. So on a whim, I suggested Sarah as the model.

What a joy it was to see my debut novel released with the beautiful face of my muse on the front cover.

A while after that, I heard from Sarah that she was going into fulltime missionary work. And lo and behold she would be working with the very Ramabai Mukti Mission that was the inspiration for my books. I had never told Sarah that until that day.

You could have knocked me over with a feather at God’s goodness.

So, naturally when Captured by Moonlight was to be released, WhiteFire graciously allowed my own daughter, Lana, to be the model for Nurse Laine Harkness.

When I tell people this story I feel a bit like Mr. and Mrs. Bennett in Pride and Prejudice. All I can say is, “God has been so very, very good to me.”

SF: What is something interesting that we would be surprised to know about you?

CL: I was once patted on the head (when I was a baby in my pram in Northern Ireland) by Prince Philip, consort to Queen Elizabeth.

And my great grandfather and grandfather were riveters on the building of the Titanic. And, no, my family does not accept any responsibility for the sinking of that ship.

SF: Wow! How unexpected. Thank you. And thank you for sharing with us today.

If you are interested, check out Christine’s books. You can download them by clicking on the links below.

“Shadowed in Silk”  and “Captured By Moonlight”

9 Comments on “Interview With Christine Lindsay”