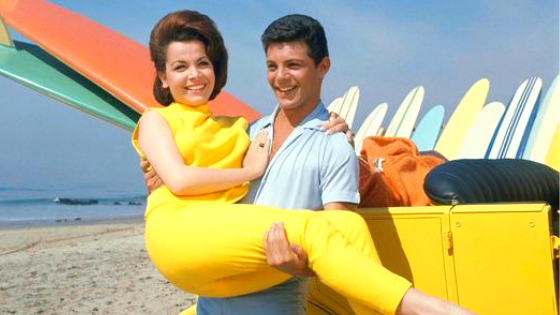 When one thinks of the 1960s one typically thinks of the Civil Rights Movement, the Vietnam War, women’s liberation, burning draft cards, and…

From 1963 to 1968 teens were wild for movies set on the beach. They all had the same basic formula. Teens/college kids, goofy grown ups, a surface level conflict, dancing, singing, surfing!

When the very first Beach Party movie released in 1963 (called Beach Party…who could’ve guessed?) it was a surprise hit, selling more tickets the weekend it opened than any of their competition.

The movie starred Frankie Avalon (at that time a 23 year old teen idol) and Annette Funicello (one of the original Mouseketeers). The duo starred in the majority of the follow up Beach Party movies including Pajama Party, Dr. Goldfoot and the Bikini Machine, and Thunder Alley.

Because Annette still had a contract with Disney, she needed permission to star in the beach films. They gave their blessing with one condition. Annette couldn’t wear a bikini. And she especially couldn’t show off her belly button!

Lots of stars made cameos in the beach movies including:

Buster Keaton in Beach Blanket Bingo, How to Stuff a Wild Bikini (yes, that’s the actual title…I know, I know…), and Sergeant Deadhead.

Mickey Rooney. Also in How to Stuff a Wild Bikini (goodness, that title just never stops being inappropriate, does it?).

Shockingly, this genre of movie couldn’t go on forever. They jumped the shark before that was even a thing (Fonzie wouldn’t do that until 1977!) with a flick called — and I’m NOT making this up — Ghost in the Invisible Bikini.

It wasn’t the last Beach Party movie (even if it should have been), but it was the beginning of the end.

I mean, you know it’s bad when even Batman starts trolling you with a parody show called Surf’s Up! Joker’s Under!

It wasn’t long before Beach Party movies were replaced in popularity by Outlaw Biker films starting with The Wild Angels.

I mean, that’s not a jarring transition. Not at all!

Fun fact: Teens often threw Beach Bashes in the 1960s. They’d play games, roast marshmallows, and dance to The Beach Boys and Jan and Dean. I wrote a beach party scene into my soon-to-release novel All Manner of Things. You can preorder the book now at Baker Book House or wherever great books are sold.