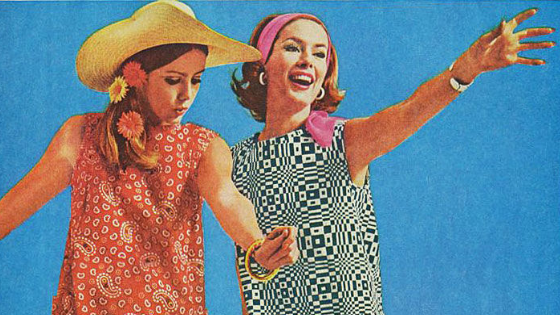 The 1960s was a decade of — ahem — interesting style choices. One that my mom mentioned to me years ago was the disposable paper dress.

By 1967, these paper dresses had become popular enough to be sold in major department stores. According to Wikipedia these dresses sold for up to $8 (or $61 in 2018).

That’s a lot of dough!

Also available were bridal gowns, vests, raincoats, and underwear. WHAT? Oh, and the paper bikinis were good for up to three wears.

Some believed that paper was the clothing material of the future and was here to stay. Like paper plates, napkins, and plastic cutlery, these dresses could be worn a few times and tossed.

(NOTE: It is inadvisable to wear plastic cutlery unless your name happens to be Lady Gaga, in which case you can wear whatever you like.)

Eventually, though, folks realized that the paper cloths didn’t fit so well and were super uncomfortable. Besides, they were hot…and by ‘hot’, I mean flammable.

By 1968 the paper dress trend had fizzled out.

You may, however have worn the second cousin of the 60s fad if ever you’ve had the privilege of donning a paper hospital gown or a disposable bib at a lobster joint.

I’m trying to imagine which characters from All Manner of Things would wear a paper outfit. And, honestly, I’m not sure that I would.

Would you wear a paper dress/vest/etc? If you’re the kind who remembers the 1960s fashion trends first hand, did YOU wear one?

Category: All Manner of Things, Flash Back Friday

← Readerly Confession: Fear of the Overhyped Book
#FBF: Fun Slang from the 1960s →