What British bakers taught me about life

Posted on January 7, 2019 by Susie Finkbeiner 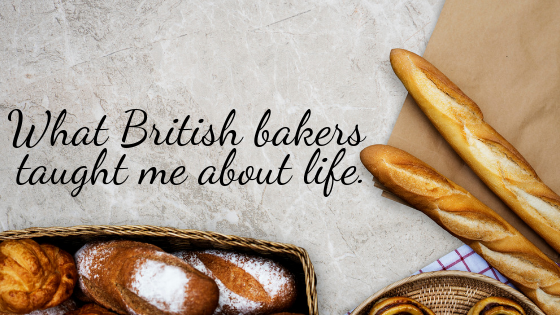 Over the past few months I’ve become enamored of the British Baking Show. There’s just something relaxing about watching them kneading and mixing and activating gluten. Whenever the pressure starts to build, the camera always cuts to someone enjoying a cuppa, the upper lip stiff as can be.

I was talking to a friend about the show (okay, I’ve talked to ALL of my friends about it) and its appeal. It’s not the baked goods (all of which I could never eat…boohoo!). It isn’t their accents (although that’s kind of nice). And it isn’t because I have nothing better to do (because I DO!).

The reason I love that show is because of the people.

Sure, they’re in competition to win the crystal cake stand at the end of the season. But they don’t undercut, backstab, or create unnecessary drama. In fact, they’re helpful, encouraging, and pretty chill.

When one of their competitors’ cakes falls flat, they have a sympathetic nod. When another receives good marks for their meringue, they share a sincere smile. They cheer each other on and commiserate over failure.

We can learn a thing or two from those baking Brits.

And, above all else, it never hurts to have a good recipe for something yummy.

← Geek Girl Goals: or 6 ways to grow as a reader in 2019
Readerly Confession: Fear of the Overhyped Book →

8 Comments on “What British bakers taught me about life”