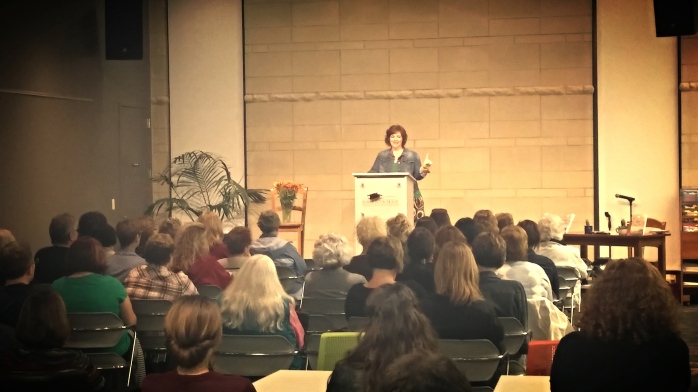 You know what I love? Book release parties. Yeah, I like being the center of attention (I’m the youngest of four…of course I love it). And it’s fun to see copies of books in the hands of eager readers.

But the really great part is that it ends up being a reunion. I see friends and family that I might only otherwise run into at a funeral.

A book party is a way better way to get together.

On Tuesday at Baker Book House I talked about the Dust Bowl, give away some fun prizes, and signed books (along with getting so many hugs that my heart was busting). What I neglected to do was talk about my necklace.

My beautiful sister made this for me several years ago. It’s a picture of my grandma when she was young. I imagine she was 14 or 15.

Her name was Pearl Louise.

Just like the protagonist in A Cup of Dust.

My grandma has been gone for about 18 years or so. I miss her very much. She was the kind of grandma I saw on the regular. We only lived a few miles from each other. She spoiled us with candy and pop and cookies.

And she’d tell me stories. I loved hearing stories from when she was a kid, running around the family farm in Blissfield, Michigan and getting into trouble with her cousin Gerald.

She sure had a lot of stories.

But she also kept a lot of them to herself. I know pieces of her silent history. That she was sent to live on that farm in Blissfield with her aunt and uncle by her mother because times were hard. I do know that she quit school after eighth grade. That she married young and became a mother soon after.

And I do know that her baby isn’t with us. What happened or where he is, I just don’t know that. It’s a mystery my family may never solve.

I know that her first marriage didn’t last long. There’s family mythology surrounding that. But what is the truth?

They met in what Grandma called a “Beer Garden” and they danced. “Oh, but your grandpa could dance,” she’d tell me. I love imagining it.

And I love the fact that she found a man like Grandpa who loved her and took good care of her (she never worked outside the home a single day after they married).

After my grandma died I longed for a connection with her. I wanted to fill some gaps in her history. As one who lives in story, I struggled with all the plot holes in her narrative.

I never knew how writing A Cup of Dust would make me feel that connection to her history. It isn’t her story. But, then again, it kind of is.

As I wrote, I wondered if my grandma, the real Pearl Louise, felt unloved or unlovable.

So, when a reader tells me that they love Pearl, it means so much more than them loving a fictional character.

The spunky 10 year old in A Cup of Dust reflects the spunky 10 year old Pearl Louise who I later called “grandma” (who ended up being spunky every day of her life). The girl in the novel who survives adversity and hardship in Oklahoma is a tribute to the girl who made it through heartbreak and tough times in Blissfield and Toledo and so many places in between.

And the Pearlie Lou who ends up knowing how dearly loved she is in A Cup of Dust reminds me of the Pearl Louise Relf who ended up with a sweet husband, a talented daughter, four adoring grandkids, and eight amazing great-grandkids. Certainly a basketful of love, if you ask me.

I’ve been waiting to write Pearl’s story for years. I’m so glad I did.

← Life is precious.
The Martian, The Dust Bowl, and The Will to Live →

3 Comments on “Pearlie Lou, Grandma Pearl, and My Favorite Necklace”