The Path of *Most* Resistance

Posted on December 10, 2014 by Susie Finkbeiner 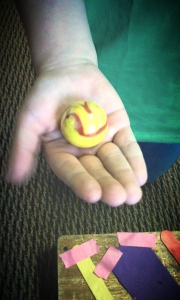 n a field trip with my daughter’s class to a science museum. Included in their trip were three workshops. In one they made a biosphere, in another they got electrical shocks (not kidding), and in the third they had to make a marble go down a ramp…as slowly….as…possible.

How did they do that?

By creating obstacles and friction to slow that marble down.

It was a fun activity.

As I watched our team putting together their ramp, I found myself thinking, “They’re working on creating a path of most resistance”.

Then I almost smacked myself in the face because I realized that’s exactly what I do as a novelist.

My characters are the marble. The setting is the ramp. The story is all the resistance and friction I add to slow down the characters from getting what they want.

I send my characters down the path of most resistance.

Because it makes for good story.

No one makes it through this life without conflict. Without those days that feel like everything that can go wrong does. We all lose more than we win in one way or another. But when we win – ooo, doggy – it’s a good day.

As I’m researching my super secret fourth novel, I’m hitting the bumps and walls of resistance. Last night I thought, “I’m too sensitive to write this story. I can’t endure it. It’s too much for me.”

But then I remembered the path of most resistance. I have to go through it. I’ve got to rumble over the bumps and ooofff into the brick walls and get caught in the barbed wire so that the story I tell is right. So it rings true.

Why would I do this to myself?

Because I believe that this story is important.

I’ve believed that about each of my novels. They are stories that needed to be told and shared and (hopefully) read.

After I hit “publish” on this post, I’m going to say a prayer, pour another cup of coffee (and probably say another prayer of thanks for coffee), open my notebook, and run back into the research for this novel. I’ll probably get overwhelmed (it’s an overwhelming era of history), I might cry, and I will need to have grace and give myself breathers throughout the day. When it gets too heavy, I’ll reread an email my buddy Jocelyn wrote to me last night (it’s good to have friends who understand).

Then I’ll get back to the path of most resistance.

Because the stories of the people I’m researching matter. And my job is to say “Look. Do you see that? Do you hear it? Can you pretend to be in the shoes of that person for a few days? Because, if you can bear it, you might just understand what really happened. You might just grow in compassion and mercy.”

And that, my friends, is what makes my job worth while.

← “A painter who sings…”
Friday is for Slacking →

7 Comments on “The Path of *Most* Resistance”