My buddy Bruce Matthews told me a few months ago that I should start reading Wendell Berry. So, I ordered a few of his books, used, from Amazon.

My copy of Hannah Coulter arrived in pristine condition. Then I got the copy of Fidelity. 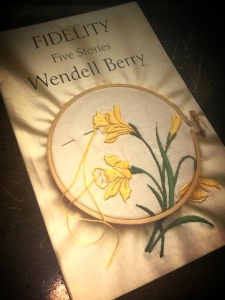 I noticed that, about half-way in the pages was a gap. I flipped through to that section and found a hidden treasure. 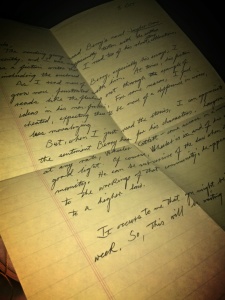 It was addressed to Paula on October 3. Which October 3? I don’t know. But the paper is crisp and the fold lines aren’t worn. I figured it was pretty recent. The copyright on the book is 1992…which seems pretty recent to me (until I realize that was the year I became a freshman in high school. Ouch).

The letter writer discussed the literary merits of Wendell Berry. Recommended that Paula stick with his fiction rather than his essays. Mentioned that the book would be waiting for her when she returned from Amarillo.

I wish I knew Paula and John. Wish I could return the book to one of them. But then I realize that this book has more history than I know. That it was sold for a reason.

Or she had a falling out with John.

Perhaps she died, leaving a vast estate of books.

Or there was a bankruptcy and she needed a little cash, selling off everything quickly, forgetting about the precious letter from John who loves her. (Oh! That’s a good story for Nicholas Sparks, huh?).

What if the book got buried under a pile of mail while she was gone in Amarillo? She didn’t notice it for years (is she a hoarder???). When she finally did, she never noticed the note from the man who loved her…the man who only, in this note, made it known in his way.

This book by Wendell Berry promises Five Stories written by the literary master.

But it has another, stuck with care between the pages. The story of Paula and John and the book that was sold.