My kids had two snow days last week. I found 4 blank canvases and a box of acrylic paints. I thought, why not… 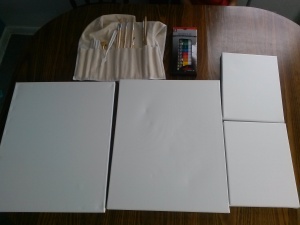 Look at all that white space! All the potential. The possibility. I couldn’t wait to see what would happen to those four spaces.

I let them choose their colors. One of my boys asked what would happen if he mixed all the colors together. I told him to go for it. See what happened.

The nice thing about acrylic is it dries fast. And it’s good for layering. I knew we could fix it if he didn’t like the effect.

This is what he made. Dark. Brooding. Textured.

My other son said he wanted to make a rainbow. But not a normal rainbow. A rainbow his way. 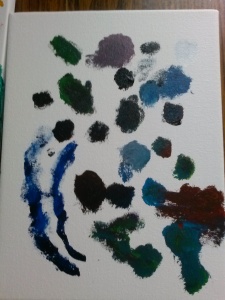 I love the simplicity of this. Even more, I love that he actually agreed to do the project. And that he felt good about his painting.

My daughter said she wasn’t sure what her painting wanted to be yet. That she needed to discover as she went. She’s 7. Her first gallery showing will be next week, I’m sure of it.

She decided that this was abstract. And this was what happiness looks like to her. I’d be inclined to agree.

I decided to give it a try, too.

Now, I come from a family of artsy types. Photographers. Writers. Doodlers. Painters. Crafties. In high school I was the singer/actor/writer. My sister was the artist. My mom was the art teacher. I stuck to performing arts.

Trust me. There’s a story there. I’ll tell you later. I promise.

So, I squeezed paint onto my pallet (the lid of a long lost tupperware dish). I started.

The paint moving on the canvas felt natural to me. Like a homecoming. Truly. And I had no idea what I was creating. I thought my daughter’s idea was a wise one.

Then. I realized it. I knew it. It smacked me so hard, the subject of the painting did. It was a character from the novel I’m currently writing. It’s her scene in the book. It’s the culmination of her purpose.

It stunned me. But I kept going. And the scene which had baffled me when I first attempted to write it became clearer. I realized why my character did what she did in that scene.

The painting became what it wanted to be. And, in so doing, the character let me know who she is.

That’s what a blank canvas can do.

My daughter took a tiny break from her work. The boys were long done with their painting and in the middle of the floor wrestling. But, my girl stepped close to me. Tilted her head the way artists do. Rested paint smudged fingers on the edge of our table.

And then she told me. And she was right.

She’s 7 and will soon hold lectures on modern art and literature in two weeks at the local university.

I’ll show you the painting. But it’s not because I’m bragging…or am I? It’s not van Gogh or even Velvet Elvis. But it’s a look at what I’m writing. And, no. I won’t tell you what it is. That for me and my girl. And my character.